Edinburgh is well known for its beautiful buildings and of course the dramatic Castle.

However, there are plenty of lovely outdoor spaces for you to explore as well.

They also play an important role in city life, hosting summer concerts, the Festival Fireworks and of course the world-famous Hogmanay celebrations.

The gardens are also transformed each winter for Edinburgh’s Christmas markets, complete with stalls, rides and a large Ferris wheel.

The 37-acre gardens are split into two sections, with the West area offering a children’s playground and one of the best spots to hear the 1 o’clock gun, while you can also stroll up paths on Castle Rock. 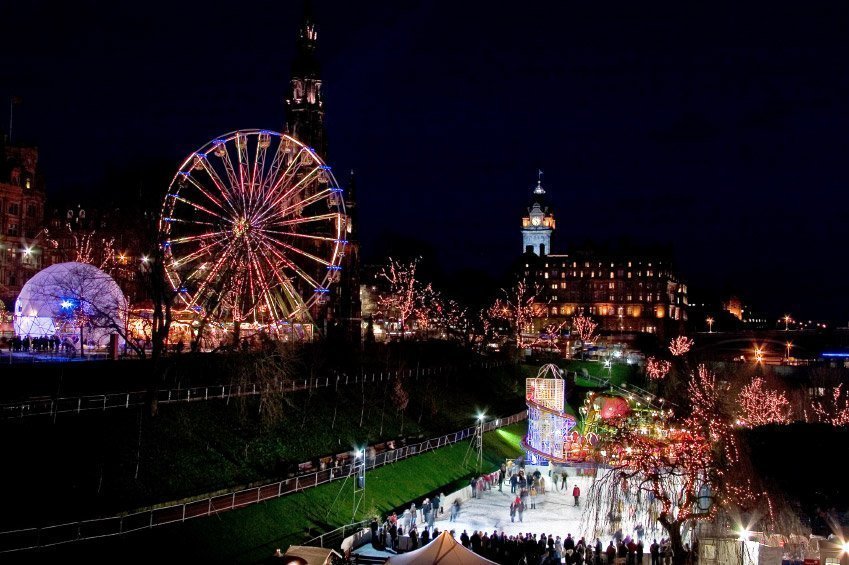 The gardens were originally created in 1460 to hold Nor’ Loch, a defence mechanism for Edinburgh Castle.

It quickly became part of everyday life as the perfect location to try witches, sink dead bodies and throw out wastewater.

However, in the mid-1700s plans were made to construct the New Town and Nor’ Loch became a barrier.

So, the loch was drained and North Bridge was constructed, the first main connection between the two sides of Edinburgh.

James Craig, the chief architect of the New Town, originally wanted the gardens to form a decorative canal.

However, when the Mound was built the area was developed into private gardens for Princes Street residents, later becoming the public park we enjoy today.

As you walk around you will notice many beautiful flowerbeds, made up of 30,000 plants.

The main point of interest is the Floral Clock, which has been planted annually since 1903 and celebrates a different theme each year. 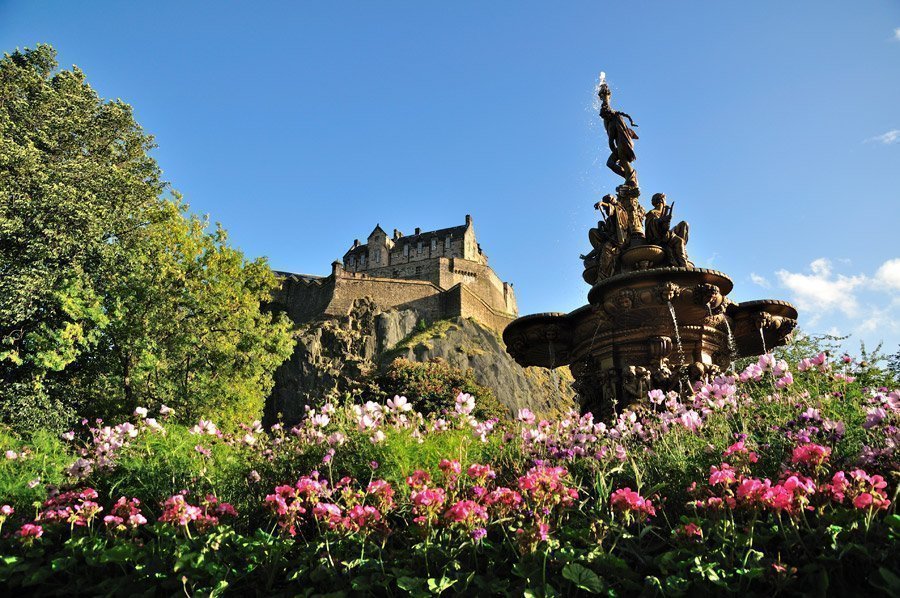 There are also many monuments and statues to see.

You can climb up the Scott monument, one of the largest monuments to a writer in the world, and see amazing views of Edinburgh’s skyline.

One of our favourite statues however is of Wotjek, the “Soldier Bear”, alongside a Polish soldier.

Wotjek, whose name means “joyful warrior” was adopted by Polish troops while they were based in Egypt in WWII. On deployment to Italy, the soldiers wanted to take the bear with them, but this was only possible by enlisting him.

Wotjek received a name, rank, and number in the Polish army, and even learned to smoke and drink beer! Following the war, he made his home in Berwickshire and later at Edinburgh zoo, where he died at the age of 22 in 1963.

The statue not only represents peace and unity but also the important bond between Polish citizens who settled in Scotland after WWII and those who have moved here in recent years.

Calton Hill, located at the end of Princes Street past the Balmoral Hotel, is one of the best places to view Edinburgh.

The panorama takes in Princes Street, Edinburgh Castle, Arthur’s Seat and stretches to Leith and the Firth of Forth. Even on a dreich day, the views are impressive! 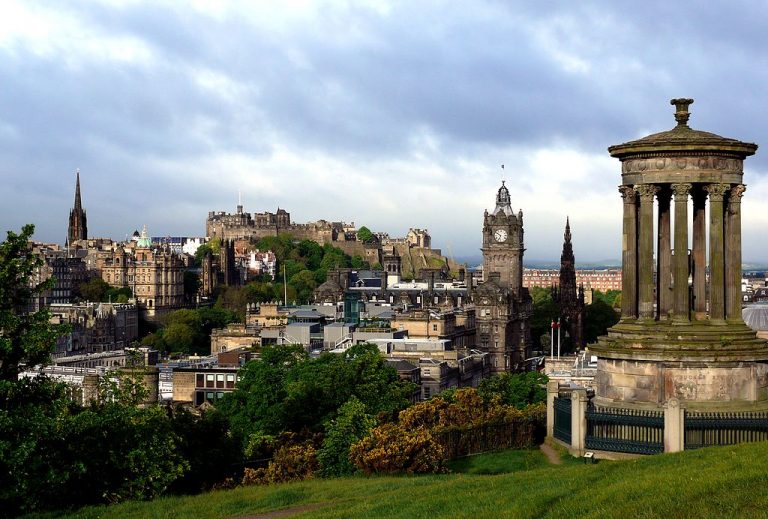 Construction on the monument began in 1822 but funds ran out meaning it remains unfinished today. 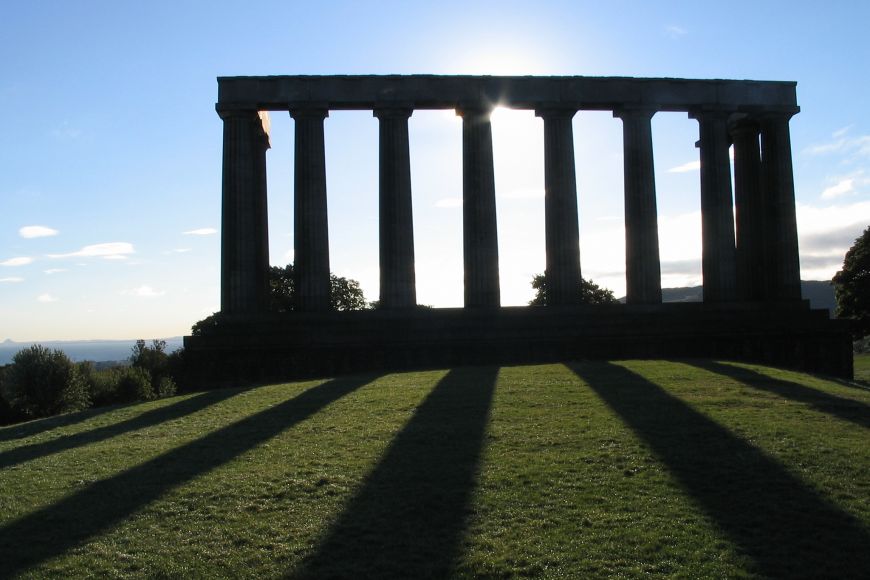 Here you will also find the Old Observatory House, the City Observatory, and Nelson’s Monument.

This monument commemorates the death of Lord Admiral Nelson in 1805 and in 1852 a time ball mechanism was added.

Ships in Leith would set their chronometers as the ball dropped at 1pm, and it still drops today!

Holyrood Park, located next to Holyrood Palace, is the perfect place for a stroll.

It has a long history, with stone and flint tools indicating human activity here since 5000BC, and is now a Site of Scientific Interest.

The main attraction of the park is of course Arthur’s Seat, an ancient volcano, from which you can see the best views of Edinburgh. 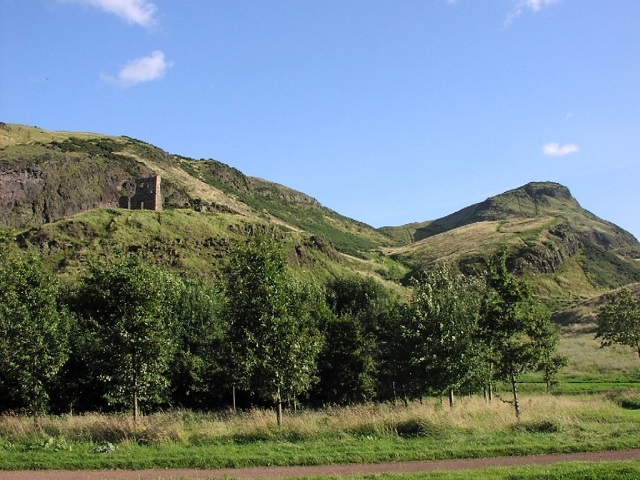 If you don’t fancy the climb there are plenty of other paths to follow around the park, including ones to Duddingston Loch, home to birdlife and up Salisbury Crags, which also offer fantastic views.

You can also see the ruins of St Anthony’s Chapel, a medieval chapel thought to date back to the 1300s. 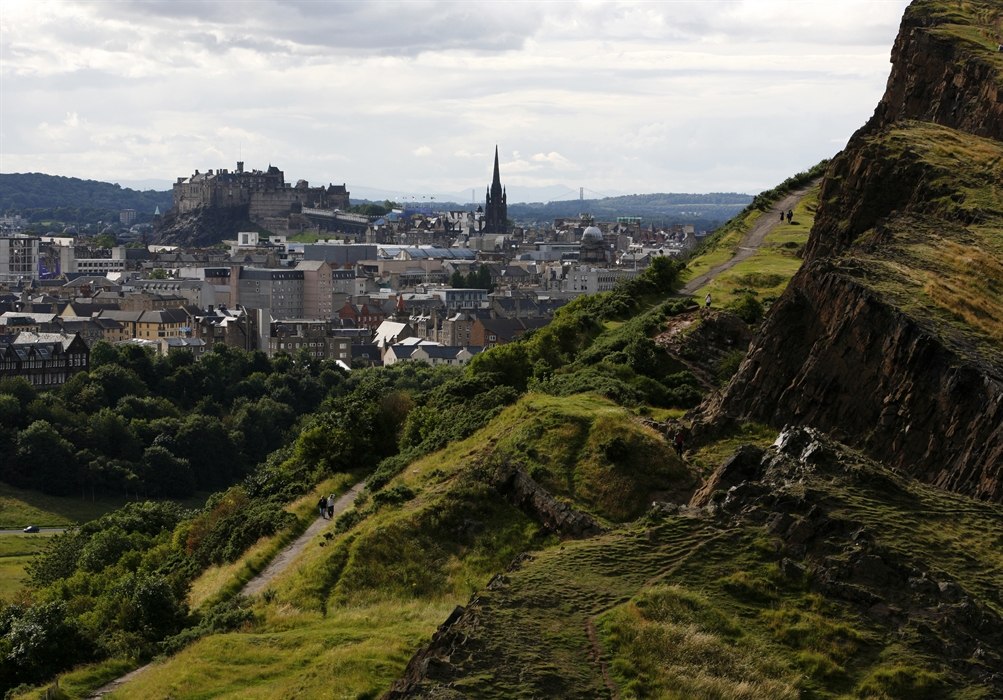 Top tip: The Guardian has a fantastic guided walk around the park which you can follow here. You can also get further information about the park at the Holyrood Lodge Information Centre, which hosts plenty of events throughout the year.

2020 marks the 350th anniversary of the Royal Botanic Garden Edinburgh, which was first opened as a physics garden near the Palace of Holyroodhouse.

The garden has an interesting history, from Arthur Conan Doyle studying here to a Spitfire crashing into the curator’s garden in 1941.

The gardens are now located a short bus ride north of the city centre and are well worth a visit.

You can explore 72 acres of a green oasis as well as the glasshouses where there is always something to see, from giant water lilies in July to Pelargoniums in winter.

There is also a demonstration garden, run in conjunction with the Edible Gardening Project, where visitors can learn the skills and knowledge to grow their own food, plus Inverleith house, an 18th-century family home that is now an exhibition space. 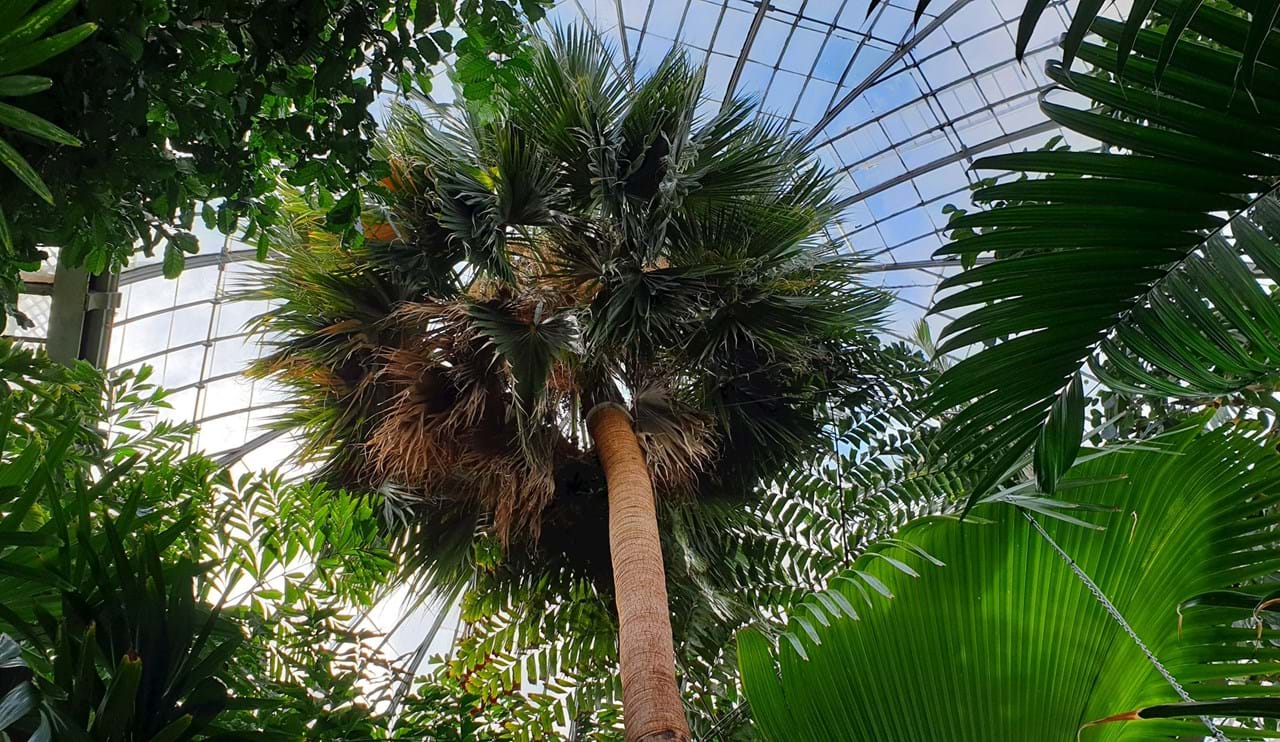 One of the most impressive areas of the gardens is the Chinese hillside, which, since 1997, has formed one of the largest Living Collections of Chinese Plants cultivated outside China.

The Royal Botanic Garden Edinburgh has been working with the Lijiang Botanic Garden in China since the early 20th century and on the Chinese hillside, you will find around 1,600 plants, all of which are rare or endangered. 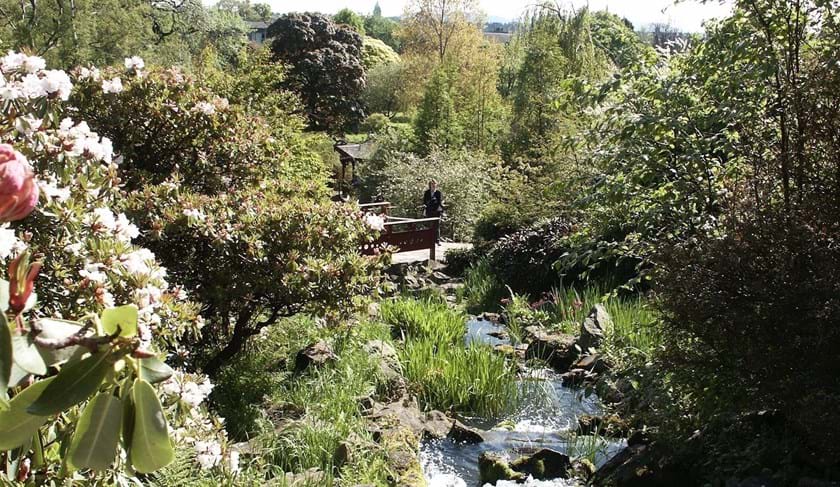 Another plant to look out for is the “corpse flower”, which last flowered in 2019 for an incredible 3rd time.

Said to be one of the smelliest plants in the world, it has attracted thousands of visitors and is native to Samatra.

Sadly, due to natural habitat loss, the flower is now classified as endangered, but, through carefully created conditions replicating the rainforest, researchers are now able to know more about the plant than ever before 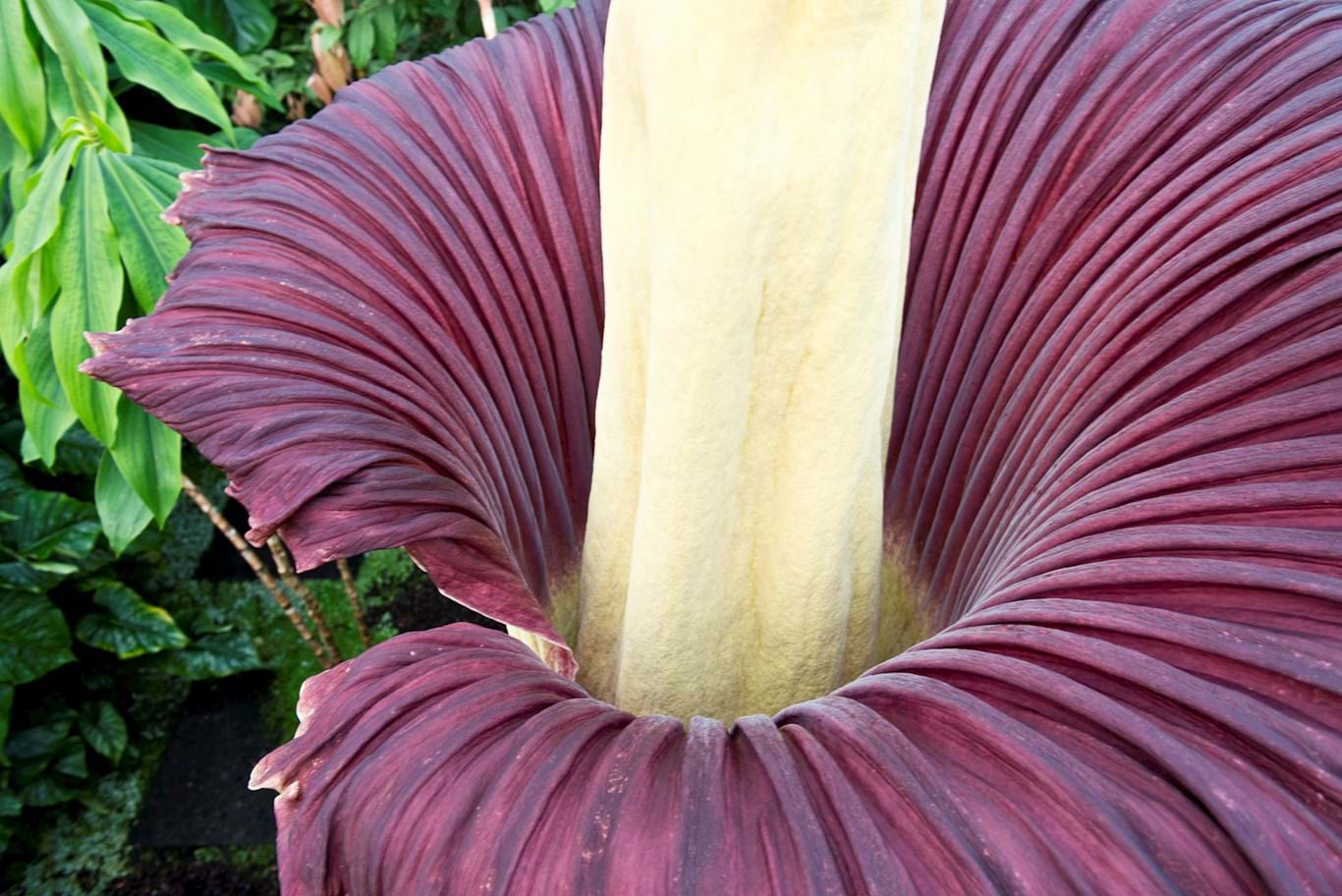 Apart from summer, the best times of year to visit are spring, when the bulbs are in flower, and December when the gardens host the Christmas at the Botanics event, a must for all the family

Take a stroll in Inverleith Park

Located next to the Royal Botanic Garden, Inverleith Park provides excellent views of Edinburgh’s skyline and is a perfect spot to watch the Hogmanay and Festival Fireworks displays.

Top tip: tune into Forth 1 radio for the Festival Fireworks and listen to the live orchestra music that accompanies the display!

When you visit the park you will notice how varied it is, from allotments to sports pitches and even a pond. Take a look at the Sundial Garden too, which houses a sundial dating back to 1890.

Although Greyfriar’s Kirkyard is well known as one of JK Rowling’s inspirations for Harry Potter, you can include it on your Edinburgh itinerary for other reasons too.

The land was originally a convent garden and was designated by Mary Queen of Scots as a burial ground in 1562.

The church was once outside the City Wall and today you can still see part of the Flodden Wall, constructed in 1560 to defend against an English attack that never came. 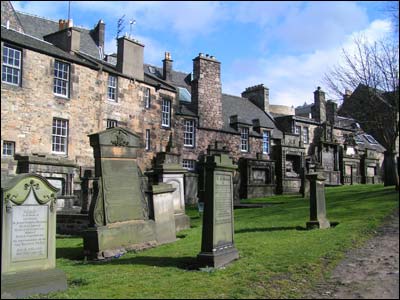 As with many burial grounds, Greyfriar’s Kirkyard is said to be haunted but not all its residents are as scary as you might think.

The most famous inhabitant is Greyfriar’s Bobby, a Skye terrier belonging to John Gray.

When Gray died Bobby guarded his grave for 14 years leading Edinburgh’s public to fall in love with him, regularly taking him food, while the Lord Provost William Chambers even persuaded the Town Council to pay for Bobby’s dog licence.

When Bobby died in 1872 he was buried at the entrance to the kirkyard – as you pass his grave make sure to leave a stick for him!

You can also see his statue on the corner of George IV Bridge and Candlemaker Row. Other famous names in the kirkyard include Sir Walter Scott’s father and James Craig, architect of Edinburgh’s New Town. 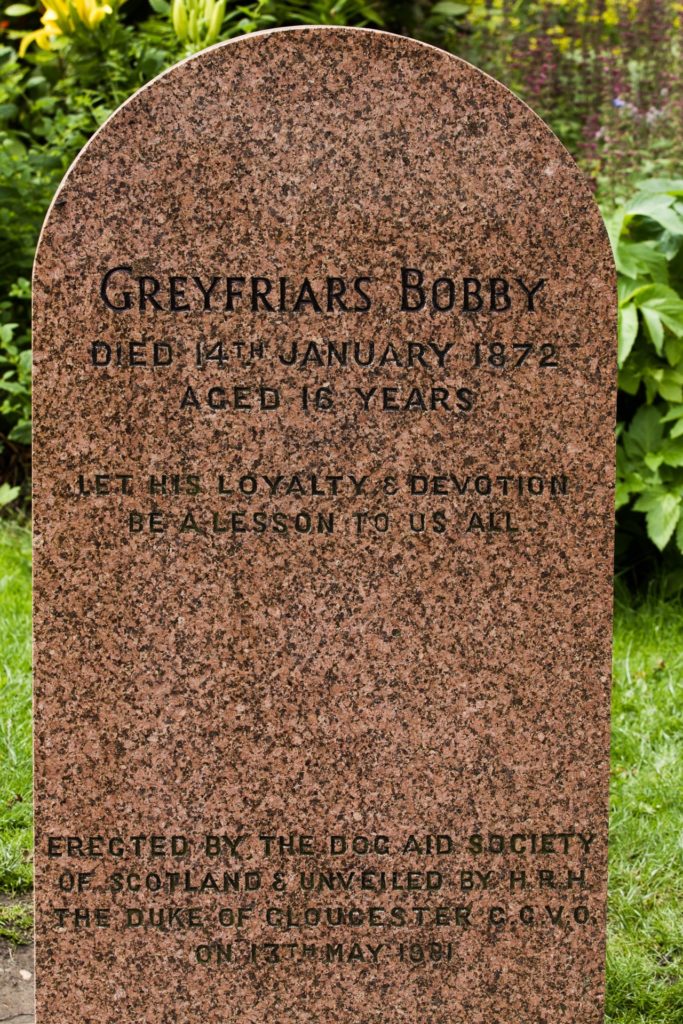 Of course, a blog post about Greyfriar’s Kirkyard wouldn’t be complete without Harry Potter!

At the back of the graveyard you can find names such as Alastor Moody and Thomas Riddell while the graveyard is also apparently the inspiration for Godric’s Hollow, the resting place of Harry’s parents.

There is a grave for William McGonagall too, not just a Harry Potter influence but also known as one of the worst poets in Scotland.

His most famous poem is the “Tay Bridge Disaster”, although he spent most of his life as a weaver and never made a living from his poetry.

If you want to know more about the Harry Potter influences in the city centre of Edinburgh you can follow our guided walking tour. 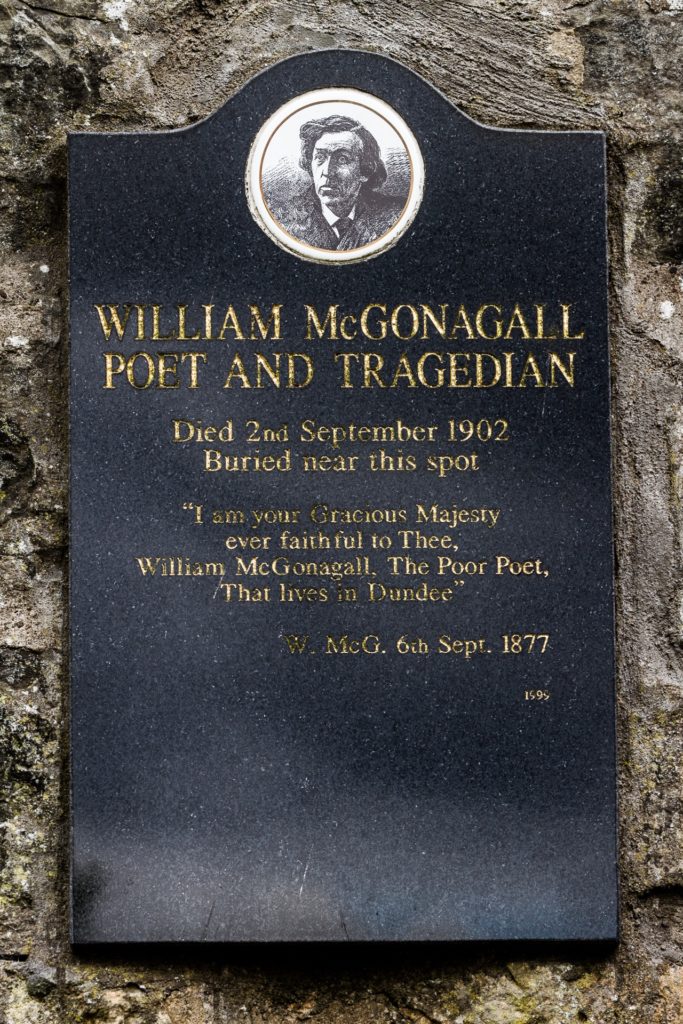 What are your favourite outdoor activities in Edinburgh? Let us know on Twitter @reserveapts