We’ve put together a walking trail around the Old Town and Princes Street so you don’t miss out on any of the top Harry Potter sights and experiences! 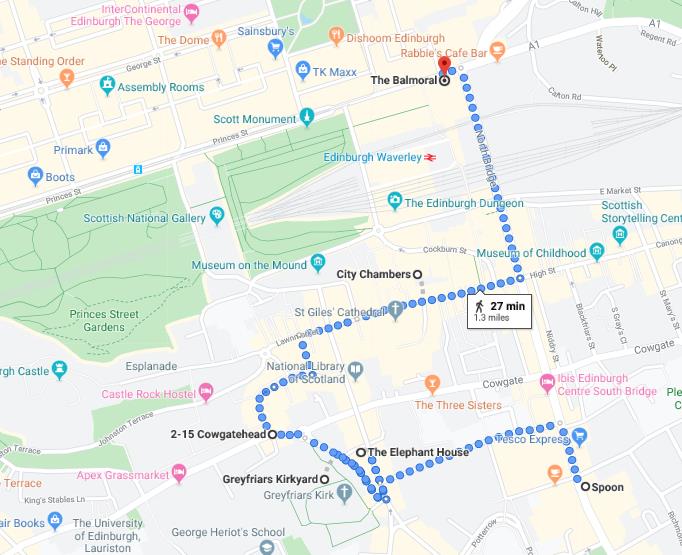 What does Edinburgh have to do with Harry Potter?

As soon as you reach the city centre you’ll immediately be able to see where JK Rowling gained her inspiration for the wizarding world. She moved to the city with her daughter in 1993 and Edinburgh’s churchyards, cafés and streets have all played a significant part in the development of Harry’s story….

Why not treat yourself to breakfast, coffee or lunch at Spoon Cafe? A great way to start this tour of Harry Potter sights in Edinburgh! 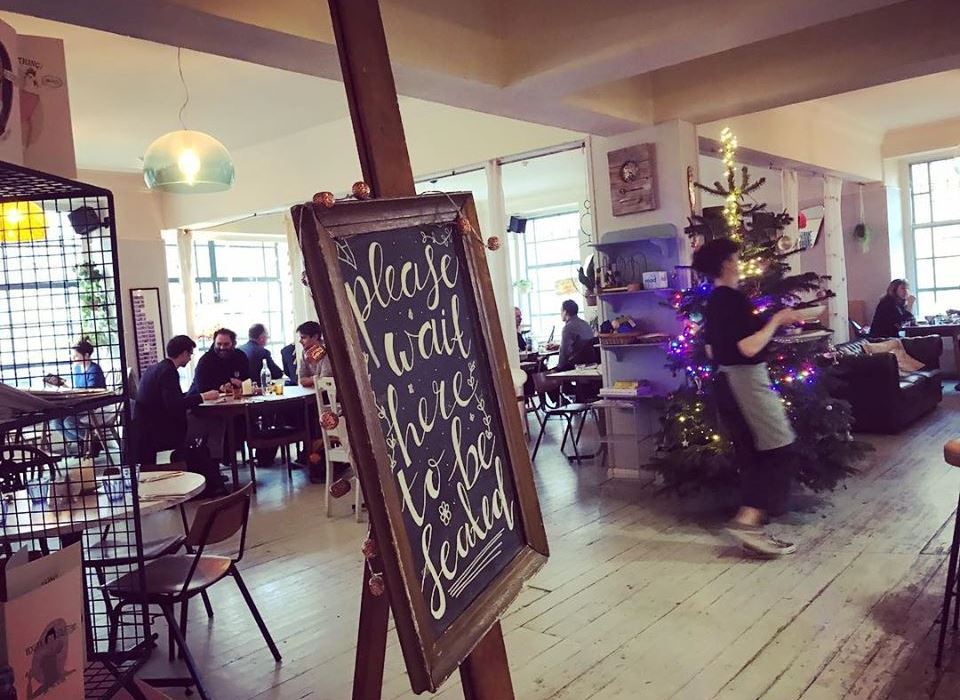 Where was Harry Potter written in Edinburgh?

As a way of getting her young daughter to sleep, JK Rowling would spend many an hour writing in several cafés around the city centre. One of these was Nicolson’s Café, now a bistro called Spoon Café on Nicolson Street. This particular writing spot was a favourite of Rowling’s and used to be owned by her brother-in-law. With the fantastic views of the University’s Old College, it’s easy to see where she gained inspiration!

Next we head down Chambers Street, past the National Museum of Scotland and right onto George IV Bridge where you’ll find the Elephant House Cafe.

Many tourists flock here each day to see another of JK Rowling’s favourite writing spots and, with a perfect view of Edinburgh Castle, who can blame her? Be prepared for a bit of a wait however as this is a very popular spot, or head in either earlier or later in the day. While you’re there make sure to pay a visit to the bathroom where you’ll find graffiti scrawled across the walls by fans from around the world in dedication to the writer and her characters.

A few years ago she was interviewed at the cafe itself.

Untitled from Dave Taylor on Vimeo.

When you step through the door of the café you’ll not just be following in the footsteps of the Harry Potter creator, but other famous authors too such as Ian Rankin and Alexander McCall-Smith!

As you leave the Elephant House, turn right and at the Greyfriar’s Bobby statue head through the gates into Greyfriar’s Kirkyard. The area of the kirkyard of most interest to Potter fans is at the far side – head past the church building and into the walled area adjacent to George Heriot’s school.

During her writing sessions in various cafés around the city the author also went for walks, seeking inspiration for her writing. One of her preferred spots was Greyfriar’s Kirkyard, a 16th century graveyard that is said to be haunted. In this walled area of the cemetery we find clear inspiration for many of her characters - keep an eye out for some familiar names…McGonagall…Potter…Scrymgeour…and, most significantly, You Know Who….

While you’re in the cemetery take a look through the gates towards George Heriot’s school built in 1628. Although it has never been officially confirmed as the school that inspired Hogwarts, there are huge similarities such as a house system and 4 towers. The school is usually closed to the public, but does open its doors during August when the BBC fringe shows arrive for a month.

Before you leave the cemetery, don’t forget to leave a stick for Greyriar’s Bobby! 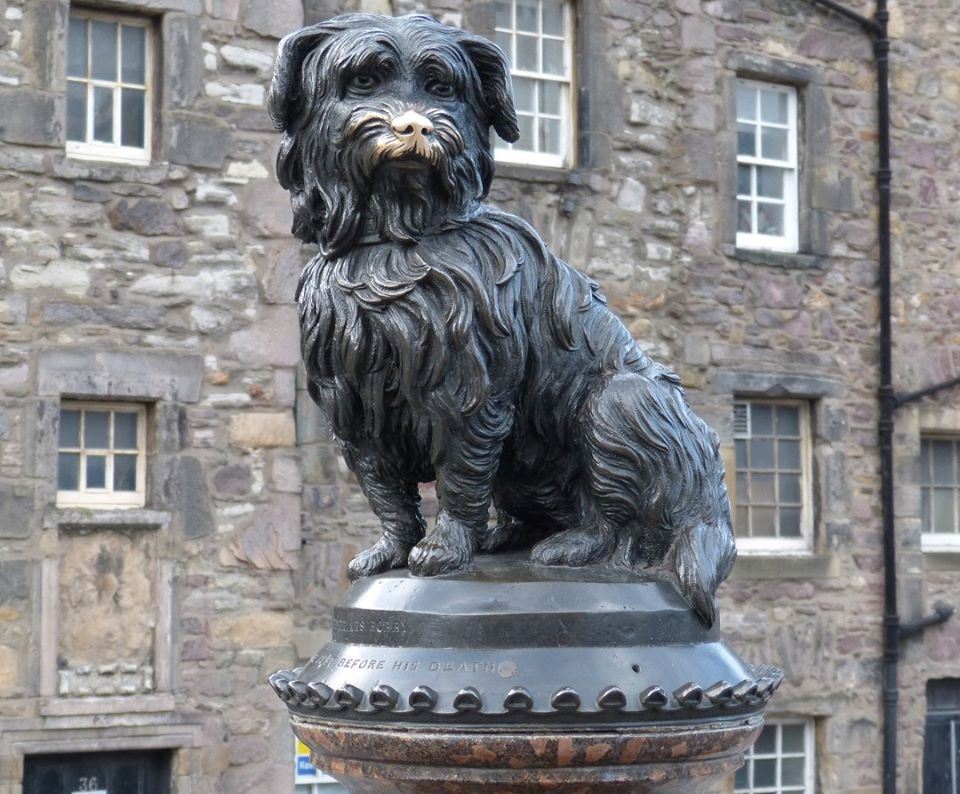 What street in Edinburgh is Diagon Alley?

Next we head to Victoria Street, Edinburgh’s very own Diagon Alley. Although it is not clear whether this street was the inspiration for Rowling, you will certainly feel like you’ve stepped into the wizarding world!

The best way to get there from Greyfriar’s Kirkyard is to exit via the gate on the north side of the cemetery (to the left of the walled area you’ve just been in). Head into the Grassmarket area – Victoria Street is the cobbled road leading upwards from Grassmarket towards the Royal Mile. On a Saturday the Grassmarket is packed full of market stalls selling local produce and arts and crafts.

The magical Victoria Street is a typical Old Town street, packed to the brim with colourful shops selling many different items – keep an eye out for the “Aha Ha Ha” joke shop towards the bottom! There are two shops in particular that Harry Potter fans should keep an eye out for: Museum Context and The Boy Wizard. Walking into Museum Context feels like walking into Ollivander’s Wand Shop and is rammed with Harry Potter souvenirs, including scarves and broomsticks, while Boy Wizard features model movie props, including characters’ wands.

Was any of Harry Potter filmed in Edinburgh?

It's worth mentioning that whilst there is plenty to connect Edinburgh to Harry Potter, sadly none of the actual filming of any of the movies took place in the capital.

Next we head up the hill to the top of Victoria Street, and then join the Royal Mile heading away from the castle. Our next stop is City Chambers, an impressive building near St Gile’s Cathedral on the Royal Mile.

Look for golden handprints on the flagstones in the courtyard of the building. These are the handprints of Edinburgh Award winners, those considered to be “an outstanding individual who has made a positive impact on the city and gained national and international recognition for Edinburgh”. JK Rowling won in 2008 for her incredible contribution to putting Edinburgh on the map through her creation of the fantastic Harry Potter novels – see how your hand measures up against hers! While you’re there keep an eye out for the handprints of other famous faces too like Sir Chris Hoy and Ian Rankin.

The final stop on our tour is the Balmoral Hotel on Princes Street. To get there, leave City Chambers and turn left. When you get to the crossroads turn left and head over North Bridge towards the 19th century hotel, identifiable by its clock tower

Here we complete the wonderful rags to riches story of JK Rowling, as this 5* hotel is where she finished writing the Harry Potter series. In one of the hotel’s grandest rooms, she wrote the final words of Harry Potter and the Deathly Hallows. Room 552, or the JK Rowling Suite, is a little on the expensive side at upwards of £1,600 per night but is truly an experience for anyone. If you are ever lucky enough to step inside the room, take a look at her writing desk, as well as her signature on the marble statue, or the brass owl doorknocker made in her honour. If this is a little too pricey for you, you can always enjoy a piece of luxury by having a drink inside the hotel

We hope you’ve enjoyed this quick tour of the top Harry Potter sights in the centre of Edinburgh! If you’ve not quite had a your fill of the wizarding world, here are a few more ideas of things to do during your time in the city.

Dark Lord Resurrection – an escape room where you can channel all of your dark magic to bring the Dark Lord himself back!

Spontaneous Potter – suggest a fanfiction title and then sit back and enjoy as performers put on an entirely improvised comedy set in the world of spells, potions and broomsticks!

The Dog House – located close to the starting point of our tour on Clerk Street, this is the closest thing to The Three Broomsticks this side of platform 9¾ . You can even try the muggle answer to Butterbeer!

Cauldron – located in the New Town, on Frederick Street, this bar truly transports you to the world of Gryffindor, Hufflepuff, Slytherin and Ravenclaw. Here you can taste their different potion cocktails and even try making some yourself!

If you want to go on a guided tour of Edinburgh’s Harry Potter sights, why not try the Potter Trail, one of the many small group walking tours or even the Red Bus Bistro Harry Potter tour, all of which come highly recommended.

Are there any other Harry Potter Tours or Locations which we've missed? Let us know on Twitter @reserveapts.