Festival season is underway in Edinburgh and it’s almost time for the launch of the largest of the bunch - The Edinburgh Fringe Festival. The largest arts and culture festival in the world, The Fringe, sees thousands of performers flock to the city each year for three weeks. The award-winning shows, fantastic performers and amazing venues make the festival unique and incredibly successful. 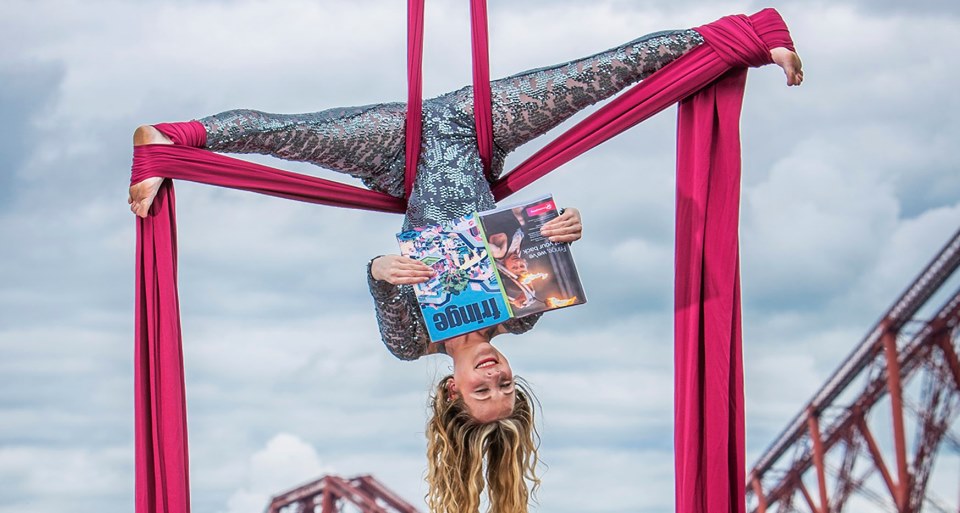 A wonderful, mad free for all. Anybody can and does take part. It's where people come to get discovered and start careers. Standards range from the almost unwatchable to future stars.

Recently celebrating its 70th anniversary the Fringe Festival is a month long programme of events including physical theatre, comedy, cabaret and dance which take place in theatres and concert halls across the city. You are absolutely spoilt for choice at the festival - In 2018 alone the Fringe included 3,548 shows across 317 venues, which resulted in the selling of 2.8 million tickets (View the - annual review for more info on the 2018 festival). There is certainly something for everyone.

Every year, performers compete to entertain audiences with outrageous stunts. One show reportedly blindfolded its audience, before transporting them by mini-van to a secret destination. All in the name of art.

The festival has also set up a year-round programme of outreach work aimed at getting people of all ages involved. 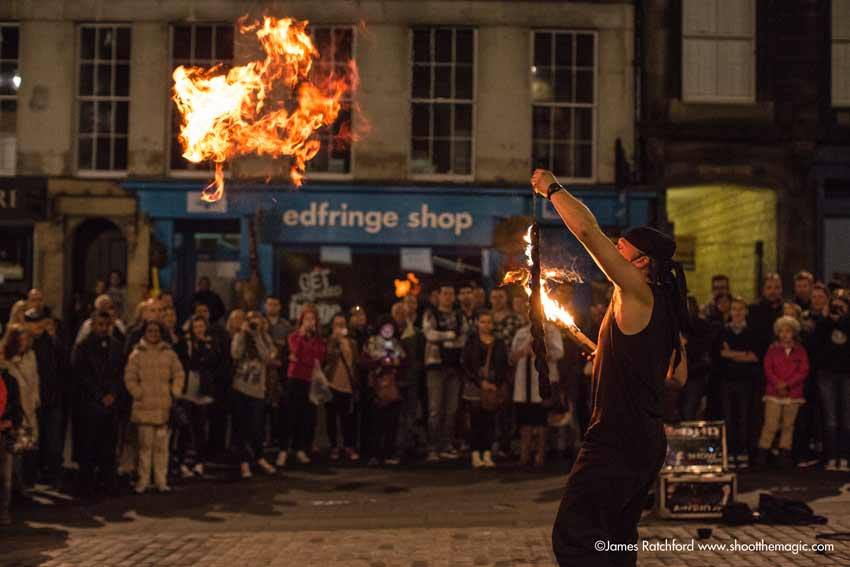 History of the Festival

The festival was established in 1947 as an alternative to the 'high arts' of the Edinburgh International Festival and has continued to grow each year. It's now hugely famous across the world and it draws many visitors to the city in the summer. Recently there has been an increase in drama performances, however comedy, dance and music are all still heavily featured.

Often confused for the Edinburgh International Festival, The Fringe is actually a separate event, albeit one which runs at the same time. The main difference in the events is the programming policies. Invites only are allowed to participate in the International Festival whereas there is no selection process for The Fringe and anyone can put forward a piece of work for inclusion.

There is also the Free Edinburgh Fringe Festival which runs from August 1st to August 25th and as the name suggests is a festival which hosts a number of completely free shows. These take place at various venues across the city and outdoors on the side of the road so keep your eyes peeled when you're wandering through. Just because they don't take your money doesn't mean they're no good. It's all part of the spirit of the Fringe to try out new things. They're free, so what do you have to lose? Pick up a copy of the Fringe listings, available free from hotels, shops and cafes, to find out what's on where while you're out and about.

Booking accommodation in Edinburgh in August can be tricky as the population of the city doubles at this time - so book your Edinburgh Fringe Festival Accommodation as soon as you can.

A great way to enjoy the festival is to rent an Edinburgh Festival apartment with a big group of friends. This can really help spread the cost - especially as all accommodation prices rise dramatically at this time of year,

It will also offer you more freedom and flexibility during your stay. Self-catering apartments (like all Edinburgh accommodation in August) get booked up very quickly, so it’s best to start looking for Edinburgh Festival accommodation early to make sure you find exactly what you are looking for!

It's worth noting that getting to Edinburgh at this time of year can be difficult as flights and trains get booked up really early (and are expensive), so it’s best to plan your trip well in advance.

We made our own infographic image a few years back in 2016 which gives you an idea of just how huge the Fringe Festival now is.

The Fringe Festival takes place in a wide range of locations and destinations. In previous years this has now included a tunnel, football stadium, swimming pool and even a biscuit factory!

However below are a selection of the more popular places to hang out, sip a drink and enjoy the very best of the Fringe Festival:

1. Pleasance Courtyard - Numerous bars and cafes set outdoors at one of the premiere comedy venues. Get yourself along, sit back, sip a beer, and breathe in the atmosphere whilst you wait. There are a large number of performances at the venue and performers are desperate to get bums on seats so it won't be long until someone approaches you asking if you want to see their show. And who knows? That free ticket for this year might be the next big thing.

2. Udderbelly Pasture – Moved to George Square in 2016 from its usual spot in Bristo Square, due to construction works, the upside cow will remain there for 2018 (as far as we know). An outdoor venue, it's a great place to graze for food among the plastic grass. Kids also love it. Ideal if you’re after some gourmet festival street food.

3. Book Festival – If you require a slightly more relaxing spot, Charlotte Square turns into a tented village in August. Entry is free and you can soak up any sunshine in the bookish atmosphere of the gardens. It’s a lovely place to escape the city with its cafe, bar and bookshop. What more could you want?

4. Sweet Grassmarket - More of an evening haunt than the other locations mentioned on this list. Exclusively indoors, drinks aren’t cheap, but you can admire some fantastic views of Edinburgh Castle. And you're in the heart of the city's bustling Grassmarket, which is known to be popular with musicians.

Surviving Edinburgh around the Festival

As anyone who’s visited Edinburgh around August would no doubt agree with, the city is very different than it is any other time of year. You need special skills to make the most of your time here. We’ve included a bit of a guide below to surviving - and even enjoying - the festival month. 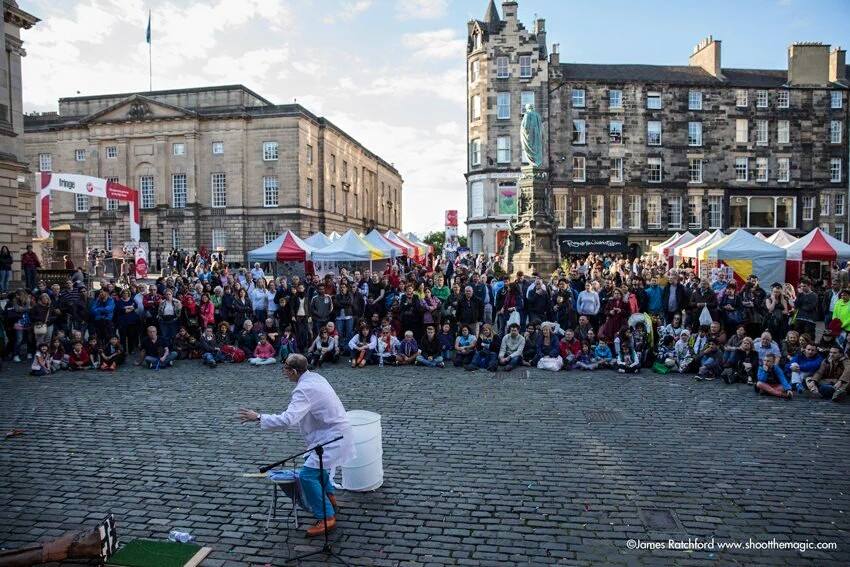 1. Beware of rickshaw drivers - You’d think the city’s steep hills would deter cyclists pulling rickshaws. But whippet-thin youths descend on the city in a swarm of lycra and fluorescence in August to pull tipsy tourists up ridiculous gradients. Make sure you’re not so tipsy you forget to agree the fare before stepping into the vehicle – or you could be forced to pay £50 for a half mile journey.

2. Half Price Tickets - Making the most of the Fringe Festival can be an expensive business, no doubt about it. Ticket prices have crept steadily upwards over the last few years and booking fees have started to appear, but there is still one notable way to save money. If you're a sucker for a bargain then get yourself some cheap tickets at the Virgin Money Half Price Hut which is located at the Mound Precinct. There are literally thousands of half price tickets available for shows every day. You can collect and buy tickets from 7th - 26th August, 10am to 9pm. Well worth getting up early to see if you can find some gems there. But be warned: they tend to disappear fast.

3. Preview Tickets - Tickets for preview shows are another way to watch shows at the Fringe whilst keeping your costs down. Preview shows also normally happen in the first few days, so keep your eyes peeled. You can book them by phone or on-line - Full Listings Here. The Fringe Edinburgh booking office in the High Street only opens its doors nearer the actual event.

4. 2 for 1 Tickets - One further way to enjoy the Fringe at a cheaper rate is to make the most of the 2 for 1 ticket offer which a number of shows take part in on the 5th and 6th August 2019. To view which shows are eligible for the 2 for 1 offer, filter results (on the top right of the listings) by 'special pricing - 2 for 1' like this here. Right now there are over 1,700 shows available at the 2019 Fringe Festival.

There is also the Friends 2 for 1 ticket offer available. If you are going to be taking in a number of shows then it might be worth registering to become a Friend of the Fringe. It starts at £32 a year and as well as a number of exclusive benefits, members are given the choice of a much larger number of 2 for 1 opportunities. Similar to the 2 for 1 offer above, you filter the results, this time by 'Friends 2 for 1' and you will see many more shows which are available to get tickets on a 2 for 1 basis. At the moment there are over 2,300 shows with the Friends 2 for 1 Ticket Offer.

5. Don’t get too carried away by reviews - Performers have to drum up whatever publicity they can, and a five-star rating on a show flier doesn’t necessarily mean a show’s going to knock your socks off. It might just mean the producer’s mum said: “Oooh, I’d give you five stars any day, darling.”

6. Experiment - It’s easy to stick to shows at high-profile venues like Assembly and Pleasance. You can be confident of what you’re likely to see. If you can manage it though, try venturing out of your comfort zone. Yes, there are some terrible shows out there, where your bottom aches from the wooden chairs. There are also some gems. And you'll pay less to see them.

7. Twitter - An obvious one but it’s the best place for the most up to date news and opinions on the festival in August (especially show cancellations). Try #edfest and #edfringe.

If it’s your first time to the festival, view our series guide on how to make the most of it:

Be sure to make the most of the Edinburgh Fringe Festival this year because it’s sure to be another spectacular event. The award-winning shows, fantastic performers and amazing venues make the festival truly unique and incredibly successful. But it's getting close so if you're visiting the city don't forget to book your accommodation as soon as you can!

And if you have any tips for helping to survive Edinburgh this time of year we’d love to hear them @ReserveApts on Twitter.