Christmas is a magical season, Edinburgh is a magical city, put the two together and you’re in for a memorable time. Despite the freezing temperatures, locals and visitors alike enjoy everything the city has to offer, especially the various Christmas markets. 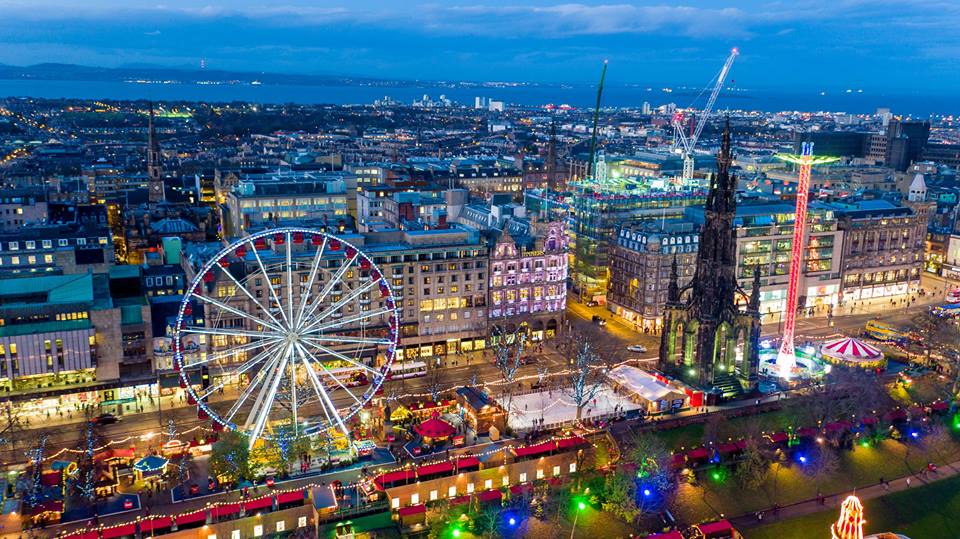 Situated smack bang in the middle of the city in Princes Street Gardens, the Edinburgh Christmas Market will take place from November 16th to January 4th between 10am and 10pm. As you make your way through more than 100 stalls, you’ll be able to shop to your heart’s content for unique and romantic items.

Whether you’re looking for something to put under the tree for a family member or friend, or a little something to spoil yourself with, at this market you’ll find the work of local artists, gastronomical delicacies, homemade items, things for the home, and things for yourself.

Treat yourself to delicacies such as cupcakes, chocolate, seafood and sausages as well as hunt for presents such as woodwork, jewellery or other fineries. Stall after stall will vie for your attention. Should you get thirsty though, there’s plenty of Scottish beer and gin to go around as well.

For entertainment, there are plenty of shows this year at Edinburgh to suit young and old. There’s ‘An Edinburgh Christmas Carol’, which as the name suggests takes a local Edinburgh twist on the Charles Dickens novel and notably includes Greyfriars Bobby. The show runs from 6th December - 4th January starting at 7:00 pm at The Royal Lyceum Theatre Edinburgh.

There’s also the legendary 'Disney’s The Lion King’ which has now been viewed by over 100 million people worldwide and features 232 in ever show. Go and see one of the most feel good and inspiring stories between December 5th & March 29th 2020, starting at 7:30 pm at the Edinburgh Playhouse.

For children, there’s ‘Baby Loves Disco’s Christmas Glitter Ball’ which has already had 5 sell out years at Edinburgh's Christmas with its 'dayclubbing' experience. Enjoy it from 15th to 21st December at the Assembly Rooms ballroom.

The Edinburgh's Christmas website has the full lineup of shows.

Sadly this year the ice skating arena at St Andrews Square won't be assembled. The decision was taken as a result of the damage caused each year to the square by the event and the assembling of the rink. Last year over 80,000 visitors enjoyed some Christmas ice skating but the good news is that the chief executive of Essential Edinburgh, Roddy Smith has said that "We will speak with our partners to come up with something else Christmassy for the square." So keep your eyes peeled for whats to come!

If it’s excitement you seek, there are a variety of rides and attractions that will take your breath away. There’s the Big Wheel, Star Flyer, Autodrome, Christmas Tree Maze, a Rollercoaster and much more. You’ll find a list of all the attractions, the dates and prices here.

Don’t be stuck inside this Christmas. Come out and play and have a ball with the good people of Edinburgh. And if you're visiting the city overnight and require an apartment you know where to go!